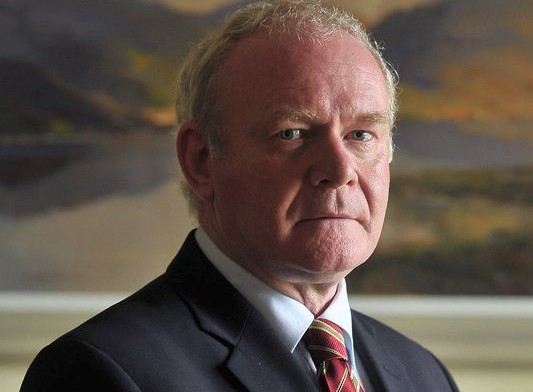 Confirmation reports are in circulation citing that Martin McGuinness will attend Northern Ireland’s final Euro 2016 group game against Germany. The confirmation has elicited a lot of reactions given that this is the first time that the republican will attend a Northern Ireland game. Back in the year 2012, he was at Windsor Park watching Derry City take on Linfield during the Setanta Cup. Martin’s love for Derry City is Ireland’s worst kept secret, and so is his passion for the sport. As Martin watched the game, he responded to some interviewers stating that he had first been to the stadium five decades before the event where he got to witness the beating of Glentoran by the Candystripes. This match had taken place during the Irish Cup Finals.

The spirits were quite high on that day, and soon after people sung the national anthem, Caral took her seat and watched the game in anticipation. Unfortunately, she had to leave early into the second half of the game. Caral was later to learn that there was a home win with four goals which took place in her absence. It was no doubt a massive blow to the then minister. One can only hope that Martin will get to watch the game until the very end.

Northern Ireland is set to face Germany in the Parc des Princes in Paris. Given that this is the final group game in the competition, there is a lot of anxiety involved and the team members cannot wait to get the match out of the way so that they can focus on the much-awaited knock-out stages ahead. Many of the fans are viewing this game as a finality after which the heated games can commence.

The players have many games coming up in the coming weeks. To start off, they will play against Poland on Sunday, a match expected to draw crowds of fans. The game will take place in Nice. On Thursday, they will face off with Ukraine in Lille. Their manager, Michael O’Neill has faith that the team has what it takes to make it to the very end and bring the cup home.

His attendance of the game comes after his visits to the Somme Messines battle sites where he paid tribute to fallen soldiers. Martin has made many efforts to reconcile with unionists, and his attendance at the games will fall in line with this. Martin got quoted stating that he is excited about attending his first Northern Ireland match and can hardly wait for the event.

The Republican believes that with an All-Ireland team, the players would fair better at an international level. When asked about the reception he expects at the event, Martin admitted that he was unsure of whether he would face opposition. He added that given that the confirmation reports were out and people were yet to make harsh comments, he was confident that it would be a success.

Despite all the disputes that have taken place over the years at the Stormont Parliament between nationalist and unionist parties, fans cannot hold back their excitement at the finals. Many politicians are also getting into a celebratory mood. Peter Robinson was so happy about the finals that he managed to take his mind off politics for a few moments. The prime minister also joined in on the excitement.

The finals have made a mark on fans, and we can only hope that Martin’s presence will ease the current political tensions.