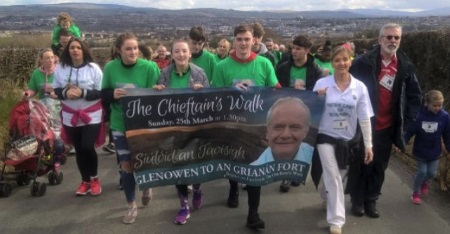 It is not often that charity walks manage to bring together thousands of participants willing to support a cause and it was, therefore, wondrous to see crowds of thousands attending a walk in honor of Martin McGuinness. Martin passed on in March 2017 and a year on; people are still grieving him. The charity walk, put together by his family, was a way to raise money for the cancer care department as well as research in the North West.

Given the reception from the participants, people could already gauge that the walk would raise tens of thousands of pounds from the moment the event kicked off. The spirits were as high as the number of people gathered for the activity, and the success was in the air long before people begun the march.

The proceeds from the walk would go to the Altnagelvin Hospital Cancer Care Center, the same hospital where Martin spent his last days undergoing treatment for amyloidosis. Amyloidosis is relatively a new disease, and his family expressed wishes to direct some of the proceeds towards research centers which could help in coming up with a cure. The ailment acts fast and is incurable such that barely four months into Martin’s diagnosis, he succumbed to the illness, something which many people are yet to accept.

Martin had a large following of people, something which Michelle O’Neill reiterated on seeing the crowd at the walk. Michelle believed that the significant number was indeed a reflection as to how high an esteem people held Martin, even in death. His works were not only visible to Republicans but to everyone in the society, something which one could tell by looking at the diverse crowd.

Bernie, Martin’s widow, bravely and diligently led the walk accompanied by their four children and other members of the family. The showers in the morning did not deter them from accomplishing their mission, and they gathered at the Free Derry Corner before kicking off the walk to the Donegal border. Bernie was all too familiar with this route as she and her husband had often walked down the lane by the Inisown peninsula on their way to the Grianan an Aileach.

Once they had gotten to the border, each participant received a medal as a way of congratulating them for their perseverance in the seven-mile walk. The family was very appreciative of the people who showed up to the charity walk as well as those who had participated in the proceeds in other ways.

Fiachra McGuinness spoke on behalf of the family, thanking everyone who had contributed to the success of the walk in one way or the other. Seeing people turn up in such large numbers in honor of their father as well as to raise money for cancer care warmed his heart, and he was confident that his father would have been proud of them.

The family walked away feeling happy that the memory of their loved one had received the honor it deserved. Best of all, cancer patients, as well as amyloidosis research centers, would benefit from the walk.