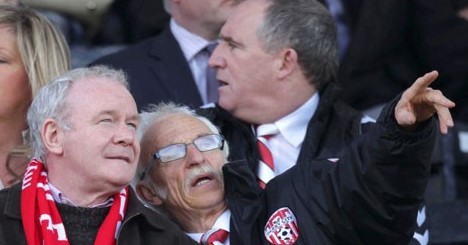 Martin McGuinness went to great lengths to support the Derry City Football Club during his life, and as such, his passing was a huge blow to the team. So great was his connection to the team that they would call on him when things went south. One such instance was during the European Cup Clash back in 1989. The organizers woke up to an explosive device in the cemetery next to the stadium and of the few people alerted about the scare was Martin, thus showing their deep respect for this renowned politician. He had commented on the incident back in 2001 when speaking to a sports magazine about bizarre events in the sports world.

Martin stated that some of the club’s representatives sought his help that day, citing that there was a significant issue on the ground. The reps were afraid that if they brought in authorities to handle the problem, they would drag it out and games would get canceled, thus being an inconvenience to both the fans and the players. Derry would have suffered a big blow as many people would be unwilling to touch the stadium with a ten-foot pole and there was a need for a way to avoid such adverse effects on the developing team. It was the biggest game that the team had ever had and there was a lot of importance attached to the event.

Given the need for secrecy, Martin and the reps decided to get rid of the explosives on their own. He tied a rope around the device and pulled it out while the directors hid behind the headstone, for fear that they would get their heads blown off. Luckily for all of them, the recovery was a success, and they disposed of the device in a man-hole, thus saving the day.

The game went on as originally planned, and none of the fans were any the wiser on the incident that has just occurred. Though they lost 2-1, they believed that they had done the right thing. Had they sought help from the authorities, that game and many others would have gotten affected, and the fans would have been in fear.

Following Martin’s revelation in 2001, many reports concerning the explosives came up. Some claimed that the provisional IRA planted the device aiming to snag the army patrol. Club members recalled the incident in different ways. Tim Dalton who was playing that day against Benfica admitted that he thought the explosive was a hoax and had laughed it off at the time. He later stated that maybe his naivety in the situation had saved the team from suffering a blow during the game. He got quoted saying that the case did not phase them in the slightest bit and the game was a success.

Decades later, Gods versus Mortals recounted the incident and reached out to Martin for a comment, but he declined to offer any information on the same, choosing to privatize the event. The publishers, however, went ahead to publish the chronicles in 2010 and people got to know about the incident that could have had disastrous results had the necessary precautions not gotten taken.

Ian Doherty who had chaired the club during the time of the incident was willing to speak to the publishers. He recalled that he had gotten an alert of the explosive’s discovery and soon afterward got to know that the device was no more. Ian did not want to know much about the incident but later came to learn that Martin had taken charge of the situation. In his interview, Ian stated that the disposal was a brave thing to do on Martin’s part.

Martin also developed a bond with the team as two of his family members were playing for the club. His brother Paul who had always been good at sports was doing very well at the club, and so was his son-in-law.

Martin’s connection to the team lasted over the years till his death, and he embarked on many projects to help the team reach its full potential. One way that he positively contributed to their growth was by getting the team sponsors to help them out with their financial obligations. Given that betting companies were getting into the business of financing teams which could market them to gamblers all over the world, Martin helped the club in seeking such companies.

Betting companies which sponsor teams not only provide training resources and uniforms but they also organize friendly matches between the clubs they sponsor to help players sharpen their skills such that they can play at international levels. Derry has undoubtedly come a long way ever since Martin developed a keen interest in it and there are many miles to cover thanks to all the opportunities that he unlocked during his time with the club.